The Education Directorate is proposing to expand the Fraser Primary School site boundary to provide more outdoor space for student learning and play.

We are seeking feedback from the local community as part of this process which requires variation to the Territory Plan.

The proposed expansion is to the north-east of the existing school to include additional land close to Tillyard Drive.

An area of land to the northeast of the school is proposed to be re-zoned from open space to community facility land to increase the existing school site by about 1.4 hectares providing additional outdoor space for student learning and play. The proposed new school area is shown on the map below.

This is a growing community, and a growing school. While there hasn’t been a Government decision for a permanent expansion of the school at this stage, we know the school will need more space in the medium term. Doing a Territory Plan Variation is the first step in this process, and will give us the flexibility we need to meet the needs of the school community over the coming years. The Government will continue to monitor current and forecast enrolment demand at this school and for the Belconnen region in the future.

Why is this proposed?

Fraser Primary School is a thriving ACT public school supporting the community of northwest Belconnen. The school has seen enrolment grow in recent years and now has almost 600 students enrolled from Preschool to Year 6. The school’s Priority Enrolment Area (PEA) includes Fraser and parts of Charnwood, Dunlop and Flynn.

School facilities have been expanded over a number of years with the installation of transportable classrooms to accommodate student growth. These classrooms have been installed on outdoor space within the school grounds and reduced the outdoor play area.

The oval to the south of the school has been used for extra play space but involves students accessing it by crossing a public footpath and additional teacher supervision will be in place when this area is used to ensure student safety.

What is the current use of the land proposed for rezoning?

This land surrounding the school is currently managed by the ACT Government through Transport Canberra and City Services (TCCS) and under the Territory Plan is zoned as NUZ3: Hills, ridges and buffer areas. This open space runs alongside the school site and primarily contains cleared pasture and patches of native grasses.

A biodiversity assessment has identified that this part of the block contains ‘exotic dominated grassland’. A section of this block further north of the Fraser suburban area (about 500 metres away) is a declared nature reserve for the natural values contained in that area.

A small additional area of land along the northwest edge of the block is included in this proposed variation that will allow the block boundary of the school to be changed so that it aligns with the existing fence.

The area to the northwest of the school, between the school and Shakespeare Crescent contains scattered native tree plantings and is not proposed to be impacted. This area contains important habitat for native birds including sightings of Superb Parrot, which is a declared vulnerable species in the ACT.

What would be the result of the proposed changes to the Territory Plan?

The Territory Plan is a statutory document that guides planning and development in the ACT. It is administered by the Environment, Planning and Sustainable Development Directorate and available at https://www.planning.act.gov.au/planning-our-city/territory-plan

A variation to the Territory Plan is being proposed that would formally:

If approved, custodianship of the land affected by the variation would also be transferred from TCCS to the Education Directorate and incorporated into the Fraser Primary School site. 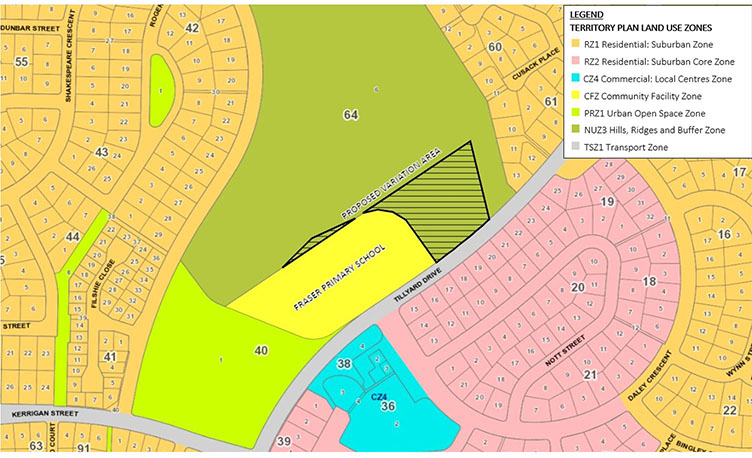 How has the Education Directorate approached this?

The provision of land for community facilities including schools within the ACT is a strategic priority for the ACT Government. The Education Directorate identifies this in the Future of Education Strategy (2018) and Strategic Plan 2018-2021 available at https://www.education.act.gov.au/our-priorities/future-of-education. These documents outline the Government’s education strategy for 2018 to 2028 and the Directorate’s strategic framework in key areas.

The Strategy establishes a policy direction that informs a range of future initiatives and projects. The Strategy has a principle of access: “Supports for learning and wellbeing are available and provided to all students.” The Plan includes a number of strategic goals, including ensuring schools are where students enjoy and thrive in learning.

The area identified under this proposal for an expansion of the land available for students at Fraser Primary School will support the Government’s and Directorate’s strategic objectives, including meeting population and public school enrolment growth through providing ACT public education facilities and access to open space and play areas.

What is the long term plans for the additional land?

No new buildings or facilities are proposed as part of this rezoning process and this proposal is for a permanent expansion of the land area only.

The Directorate monitors and plans for population and public school enrolment growth for all regions of the ACT, including developing areas such as Belconnen, and will continue to monitor the public education needs of the Fraser Primary school community in the future.

How can I have my say?

Written feedback can be provided:

The Education Directorate’s consultant, WSP, will host an online public information session. Community members can hear from the project team and ask any questions. For COVID safety, this will be held as an online video meeting on:

Please register your interest in attending the session via email to planning.canberra@wsp.com by 25 September 2022. You will receive a return email including a link to join the session on Microsoft Teams.

Further questions can also be directed to WSP on 6201 9600 or to Education Directorate at EDUSchoolPlanning@act.gov.au

What are the next steps?

Comments from this engagement process will be considered by the project team and collated in an Engagement Report that is presented to the Environment, Planning and Sustainable Development Directorate (EPSDD) with a Planning Report supporting the proposed Territory Plan Variation, expected to be complete by the end of 2022.

EPSDD will consider the proposal and conduct a formal consultation on a draft Variation to the Territory Plan in 2023, including making these reports available and consulting other ACT Government agencies for comment.